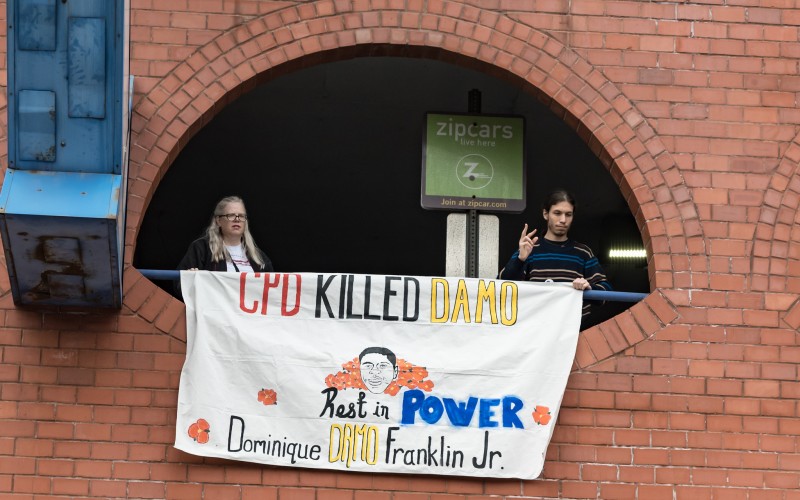 On the heels of the second annual #DamoDay, it is fitting to share news about the end of We Charge Genocide.

We Charge Genocide (WCG), an intergenerational effort to center the voices of the young people most impacted by police violence, launched two years ago in June 2014. We were inspired by the 1951 We Charge Genocide petition to the United Nations to document the violence and torture to which young Chicagoans of color (in particular Black youth) were subjected. We came together in the wake of the Chicago Police Department’s killing of Dominique Franklin Jr (known as Damo to his friends).

We could not imagine what the past two years would bring when we began. We started with the intention of sending a delegation of 6 young people of color to the United Nations Committee Against Torture to share Damo and other young Chicagoans of color’s stories of police violence. With the support of many of you, we raised over $20,000 in just a few days and were able to send 8 incredible young people to Geneva in November 2014. The story of their successful organizing has been chronicled across the world and an archive can be found at the WCG website for posterity.

In the two years that we were active, there were many accomplishments. We took the time after our first year of collective work to list some of those accomplishments: http://wechargegenocide.org/one-year-of-we-charge-genocide/

We continued to organize together over the next year to push for data transparency in stops and frisks through the youth-led #ChiStops campaign. We published a well-received report about the failures of community policing (http://wechargegenocide.org/press-release-community-policing-is-not-the-answer-countercaps-report/). We raised awareness about how much of Chicago’s operational budget is consumed by policing through the Chicago For The People campaign (http://www.chicago4thepeople.com). We worked in communities across Chicago to marry art, peace circles and conversations about transformative justice through the Gone But Not Forgotten Quilt Project (https://wcgmemorialquilt.com). We engaged Chicagoans through a safety beyond policing campaign. Finally, we worked in solidarity with our comrades and co-strugglers across the city to support the ongoing mobilizations against police violence (http://byp100.org/young-black-organizers-decline-private-meeting-with-mayor-to-discuss-the-video-of-the-execution-of-laquan-mcdonald/).

So there was a lot of work done through WCG. But the most important accomplishment is that WCG provided a space and container at a critical time in Chicago for disparate people to learn, grow and build together. The evidence of this success exists in the current interventions that were born out of relationships that were built through WCG.

Over the next few days and weeks, WCG’s social media will change to accommodate the end of our work together. Some past WCG members are building a People’s Response Team that will work to document and provide needed support after police shootings. Please also keep an eye out for the Gone But Not Forgotten quilt to be exhibited across Chicago this Fall. We are planning to keep the We Charge Genocide website up for posterity so that our work is archived online. We will also find other ways to document our efforts.

We thank every single person who contributed to our work. We are so grateful for the support we received. We are proud of the work that we did together.

The struggle continues and WCG members continue to struggle in multiple spaces across Chicago and beyond.

We dedicate everything that we accomplished to our beloved friend and comrade Damo. Your life mattered. We love you. You’ll never be forgotten.