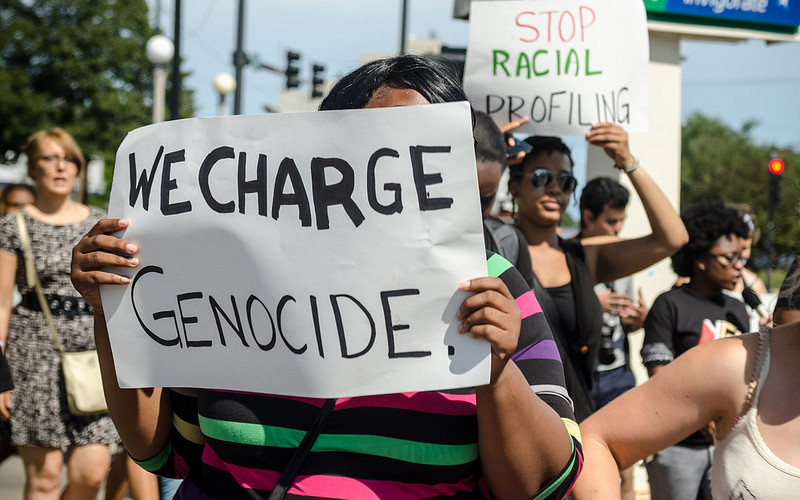 Chicago 9/15 — This November, a new Chicago group, We Charge Genocide, will send six organizers to present a report to the United Nations Committee Against Torture at their 53rd Session in Geneva, Switzerland, during which the U.S. will be under review.

We Charge Genocide is a grassroots, inter-generational effort to center the voices and experiences of young people of color in marginalized communities most targeted by police violence in Chicago. The group debuted with a Youth Hearing on Police Violence in early August. Data and stories gathered at this hearing, and via the group’s online police encounter submission system, have been compiled into a shadow report which will be submitted to the UN in mid-September.

“The youth testimonies and CPD data analyzed in our report to the UN reveals a pattern of cruel, inhuman, and degrading treatment of young people of color by the CPD. This abuse occurs at extraordinary rates, disproportionately against youth of color, and with impunity. Unfortunately, the CPD refuses to acknowledge or respond to this pervasive violence, and thus we are appealing to the UN for support.” says Page May, a We Charge Genocide organizer.

“The UN has already condemned the U.S. as being a hotbed of police violence in past reviews. We Charge Genocide will present a report to the UN Committee Against Torture stating that police in Chicago aren’t just harassing and brutalizing youth of color — their actions legitimately qualify as torture,” says Monica Trinidad, a We Charge Genocide organizer. “By verbalizing and presenting the bold testimonies and horrific experiences young people face at the hands of the Chicago Police Department, we hope to persuade the UN to classify Chicago police violence as torture and to take actions to help end this brutal and destructive treatment.”

The group of young organizers are in the process of submitting their shadow report to the UN for review, and will be testifying in front of the UN in mid-November. In order to do so, they will need to raise $15,000 for travel expenses. The group is kicking off their fund raising campaign today with a YouTube video: https://www.youtube.com/watch?v=KuZrSzc9KvQ and an 8PM CDT info sharing session on Twitter (include link to pastebin).

We Charge Genocide is volunteer-run by Chicago residents concerned that the epidemic of police violence continues uninterrupted in Chicago. The name We Charge Genocide comes from a petition filed to the United Nations in 1951, which documented 153 racial killings and other human rights abuses, mostly by the police. While there is a long tradition of collecting testimonies of human rights violations and taking those to the UN, there has never been a specifically youth-driven effort.

In addition, We Charge Genocide hopes to equip individuals across Chicago with information, resources, and tools to more proactively hold police accountable. We Charge Genocide respects and seeks to lift up the existing efforts to hold the Chicago Police Department accountable, to reform the CPD, and in some cases to seek viable alternatives to policing.
– END –