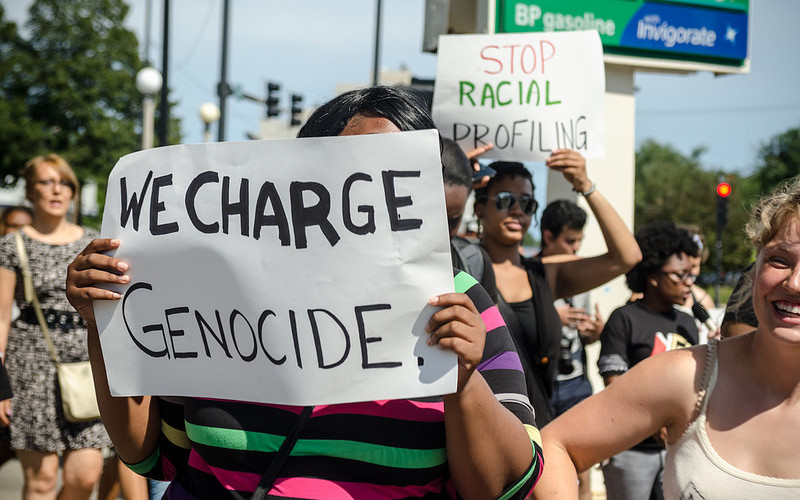 Chicago organizers release report to the UN exposing ongoing, pervasive Chicago Police violations of the Convention Against Torture, as well as call for a protest at the 11th District Police Station, formerly run by disgraced Commander Glenn Evans.

CHICAGO 10/20– On October 22, a national day of action against police brutality, local organizers with We Charge Genocide (WCG) will release a report to the public detailing Chicago Police violence in marginalized communities and against youth of color.

The full report, We Charge Genocide: Police Violence Against Chicago’s Youth of Color is now available online at http://report.wechargegenocide.org/

We Charge Genocide: Police Violence Against Chicago’s Youth of Color contains data and personal narratives collected by WGC at events, using their online submission form, the #ChiCopWatch hashtag, as well as publicly available resources. The report also includes an infographic, Chicago Police Violence By The Numbers.

The web companion to the report includes:

The report shows that CPD actions violate the United Nations (UN) Conventions Against Torture. The presentation will take place at 9 am at Jane Addams Hull-House Museum, 800 S Halsted St, Chicago.

Later that day, at 5:30 pm, WCG organizers who will travel to the UN to present the report will be available for interviews before a 6:00 pm silent protest at the 11th District Police Station, at 3151 W Harrison. The 11th District is a hotbed of police brutality. Recently, the Commander of the station, Glenn Evans, was accused of putting his gun into a suspect’s mouth. Brutality lawsuits against Evans alone have cost taxpayers nearly a quarter of a million dollars.

1. We call for a decrease in CPD spending and a reinvestment of that budgeted money into the black communities most devastated by poverty in order to create jobs, housing and schools. This money should be redirected to those city departments charged with providing employment, housing and educational services.

2. We demand reparations for the survivors and victims of Chicago Police Torture

3. We demand that the federal government discontinue its supply of military weaponry and equipment to local law enforcement including the Chicago Police Department.

4. We demand that the CPD answer the questions that we have posed in the interest of transparency and accountability: cpdquestions.tumblr.com

5. We call on the CPD to release the names of all officers involved in killing Roshad McIntosh.

In November WCG, will send eight organizers to present a report on Chicago Police violence to the United Nations Committee Against Torture at their 53rd Session in Geneva, Switzerland, during which the U.S. will be under review. With widespread community support, the group raised over $20,500 via online fundraiser and a series of fundraising dinners. Because of the generosity of people in Chicago and around the country, WCG has added two additional organizers to the Geneva delegation.We Charge Genocide is volunteer-run by Chicago residents concerned that the epidemic of police violence continues uninterrupted in Chicago and who seek to equip individuals across the city with tools to more proactively hold police accountable. The name We Charge Genocide comes from a petition filed to the United Nations in 1951, which documented 153 racial killings and other human rights abuses, mostly by the police.