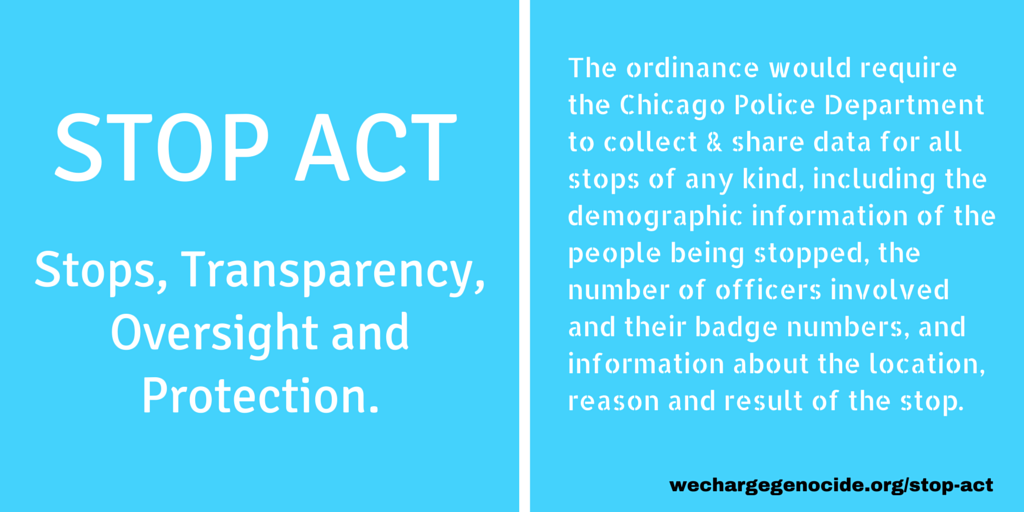 Today We Charge Genocide and Chicago Votes introduced the Stop, Transparency, Oversight and Protection (STOP) Act  at a press conference on the second floor of Chicago’s City Hall before the City Council meeting.

Aldermen Moreno, 1st Ward, Alderman Maldonado, 26th Ward, and Alderman Sawyer, 6th Ward spoke in favor of the new ordinance, which would increase data transparency for policing in Chicago, making it possible to better assess the effectiveness and fairness of Chicago policing generally, and stop and frisk tactics specifically.

The ordinance would require the Chicago Police Department to collect and share data for all stops that it performs, including demographic information of those stopped, the badge numbers of officers involved, as well as the location, reason, and result of the stop. The Chicago Police Department would also be required to give receipts to those stopped, as well as to collect and share the data on a quarterly basis, so that various programs can be evaluated for effectiveness and fairness.

The STOP Act would help Chicago to catch up with New York City and other districts, in terms of data transparency and police accountability. New York City collects and analyzes its stop data, and shares it in an accessible format. Using this data, the police have reduced the number of unnecessary stops and frisks performed, and continue to reform their policies as new data comes out.

A recent report put out by the ACLU of Illinois stresses how the CPD’s insufficient and incomplete data collection methods make real accountability and oversight all but impossible. In addition to requiring police to document and account for all stops and frisks, the the STOP Act would require police to give those stopped a receipt detailing the transaction.

This would be a significant step towards transparency and would allow communities and individuals alike to be better informed and evaluate the practice for themselves.

According to Page May, organizer with We Charge Genocide, “In this moment, during this national conversation about police violence and profiling, we need to do better. Passing the STOP Act would be a significant step forward. The STOP Act would allow Chicago to catch up to other cities like New York, and get data transparency right, right now. It would give us more tools to evaluate stop and frisk, and would allow us to develop a more complete picture of the impact of these police practices on communities across the city.”

In addition to ChiStops, over 30 other community groups have signed on in support of the STOP Act, including the ACLU of Illinois, Black Youth Project 100, Chicago Votes, Moms United Against Violence and Incarceration, and Black Lives Matter – Chicago.

For more information about the STOP Act, see: wechargegenocide.org/stop.act

#ChiStops: Empowering young people through popular education and leadership training to resist racial profiling and other biased policing.
We Charge Genocide is volunteer-run by Chicago residents concerned that the epidemic of police violence continues uninterrupted in Chicago and who seek to equip individuals across the city with tools to more proactively hold police accountable. The name We Charge Genocide comes from a petition filed to the United Nations in 1951, which documented 153 racial killings and other human rights abuses, mostly by the police.

Stop and Frisk in the News:

New York has essentially eliminated stop-and-frisk – and crime is still down
12/3/2014, Washington Post